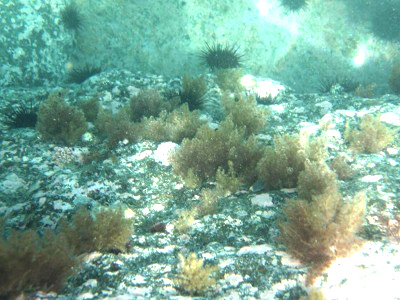 The algae consist of seaweeds and microscopic plants – microalgae. The seaweeds, the common term applied to multicellular marine benthic algae, include green, brown and red forms and are also called macroalgae.  The Hokkaido University library is a rich repository of resources on algal taxonomy, and our herbarium contains more than 100,000 seaweed specimens. Our laboratory is well equipped for microscopic observations, algal culture, DNA sequencing, and other techniques.The Division of Biodiversity is one of the best places in Japan to study both macroalgal and microalgal diversity.

Taxonomy, phylogeny, and evolution of seaweeds

Taxonomy, phylogeny, and evolution of seaweeds

My research interests are seaweed diversity in Japanese waters. The adjoining waters, Southeastern Asia and Russian Far East, are also my fields. Chemotaxonomical studies on the red algal genus Laurencia are mainly carried out. Most species in this genus produces specific brominated chemical compounds which have antibacterial activities.

Systematics of microalgae, mainly focusing on Volvocales (Chlorophyceae). Volvocales includes various morphology, and there are good materials for the research on cellular evolution. However, their taxonomy has been so insufficient that large number of new species are to be described. We isolate new culture strains from field samples, and research their taxonomy based on morphology, physiology, and molecular phylogeny.

My interests have mostly revolved around apicomplexan parasites of invertebrates. The particular assemblage of apicomplexan parasites I study are referred to as gregarines; they are some of the earliest lineages, if not the earliest lineage, of apicomplexans. They parasitize invertebrates such as polychaetes (marine worms), crustaceans (e.g., crabs and shrimp), and tunicates (just to name a few). Other lineages of marine apicomplexans also infect invertebrate groups such as coral and mussels (shellfish). Overall, by improving our knowledge of the biodiversity of marine apicomplexans, and investigating the relationships they have with each other and their host groups, it is my goal to fundamentally transform and enhance how evolution is viewed within this group.